·        SEED began with an inaugural meeting on February 17, 2009. Soon after, ground was broken on the first of three school gardens at River Mill Elementary.

·        SEED volunteer middle schoolers and staff broke ground during the winter of 2010-2011 at the Estacada Middle School on a lovely pinwheel-shaped garden, using donated funds. The garden was first was planted by students on Earth Day of 2011.

·        SEED wrote a successful $7,955 grant to the Clackamas County Healthy Eating Active Living in 2010 to complete the construction of the Estacada High School’s 30 ft. x 80 ft. greenhouse. The greenhouse was put into service in the fall of 2012.

·        SEED wrote a successful $2,000 grant to the Whole Foods Whole Kids Foundation to expand and build a second garden at the Estacada Middle School in the spring of 2014. This row crop garden capitalizes on the long-standing partnership between the Estacada Middle School students and the Estacada Area Food Bank, where students volunteer regularly.   This garden was built to be planted, maintained and harvested by students, to provide fresh produce that the Food Bank would otherwise have to buy at great expense.

Support and reinforce the District’s efforts to purchase fresh, local produce by working with the District Food and Nutrition Services to help identify and/or grow local, sustainably-produced foods for the District’s meal programs.

Decrease the risk of food insecurity in our community and improve nutrition through fun, hands-on learning activities.

SEED can use all kinds of donations! Some of these donation needs are:

To donate any of the above items, donate your skills, or volunteer your labor, please contact the 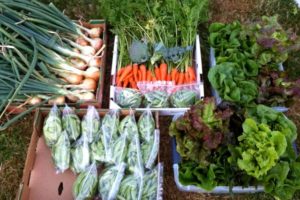